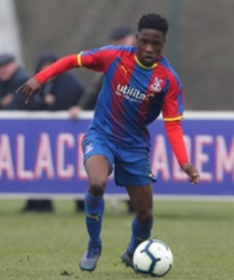 David Omilabu netted his second consecutive brace but could not prevent his team Crystal Palace from losing 3-2 to Arsenal in an U18 Premier League fixture on Saturday, allnigeriasoccer.com reports.
The 2002-born attacker has started the 2020-2021 season in fine form, netting twice against Southampton in his first match of the season last weekend.
Omilabu made the Eagles starting lineup along with Tayo Adaramola; Victor Akinwale came off the bench for the last 21 minutes while Arsenal's Mazeed Ogungbo put in a 77-minute shift.
Omilabu opened the scoring just before halftime with a well taken strike from the middle of the box after he was set up by Rowan Smith.
Marcelo Flores equalised for the Gunners on 59 minutes before Khayon Edwards gave them a 2-1 lead in the 66th minute.
Seven minutes before the final whistle, Omilabu bagged his second of the game, but Arsenal were back in front two minutes later thanks to Flores' goal which proved to be the winner.
Omilabu ended the 2018-2019 season with an impressive 41 goals from 26 games for the youth teams of Crystal Palace and provided 23 assists.
Ifeanyi Emmanuel
Photo Credit : cpfc.co.uk
Copyright ANS