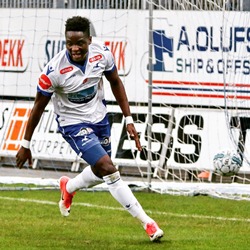 Nigerian winger David Akintola has ended speculation about his future after agreeing a deal with Turkish Super Lig newcomers Hatayspor, the player's French agent Cedric Mazet has informed allnigeriasoccer.com.
Hatayspor have pulled off a transfer coup by luring the FC Midtjylland star to Antakya as he was wanted by a plethora of European clubs.
The 24-year-old was high on the wishlist of Cypriot First Division champions AC Omonia and APOEL Nicosia as well as clubs in Poland and Portugal but no agreement was reached with Midtjylland.
He has signed a loan deal with Hatayspor that will keep him at the club until the end of the 2020-2021 season.
Since joining Midtjylland from partner club FC Ebedei in 2015, Akintola has enjoyed loan spells at Scandinavian clubs Thisted, Jerv, FK Haugesund and Rosenborg, before joining AC Omonia for the second half of the 2019-2020 season.
Akintola arrives Hatayspor with a big reputation having featured in the UEFA Champions League qualifiers and Europa League during his loan spell with Rosenborg.
Hatayspor were promoted to the top-flight of Turkish football at the end of the 2019-2020 campaign by virtue of winning the First League.
Ifeanyi Emmanuel
Copyright ANS