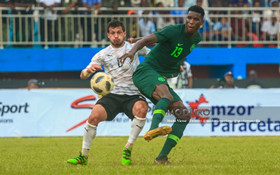 Nigeria international Paul Onuachu scored a brace for the second consecutive game as Racing Genk and KV Oostende shared the spoils with a 2-2 draw at the  Luminus Arena on Monday night, allnigeriasoccer.com reports.

The lanky striker has been preferred over compatriot Cyriel Dessers in the starting lineup for the last three matches and the new Super Eagles invitee would be bothered that he has not tasted action in back-to-back matches ahead of a potential debut against Algeria on October 9.

Onuachu cancelled out McGeehan's opener in the ninth minute before putting Genk in front when he converted a controversial penalty eight minutes into the second half, but Gueye scored seven minutes from time to salvage a draw for the visitors.

Following his brace vs KV Oostende, the former FC Midtjylland star is now the joint highest goalscorer in the Belgian First Division A with six goals, an honour he shares with Daan Heymans of Waasland-Beveren.


Onuachu has been controversially left out of the Nigeria squad for their upcoming friendlies against African champions Algeria and Tunisia.
Racing Genk, who are eleventh in the standings with nine points, travel to Waasland-Beveren on Saturday.
Ifeanyi Emmanuel
Copyright ANS