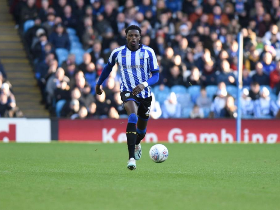 Retired Nigeria international Dominic Iorfa, the father of Sheffield Wednesday Player of the Year with the same name,  has confirmed that his son is willing to switch his international allegiance from England to Nigeria provided that the Nigeria Football Federation and manager Gernot Rohr show their interest in the central defender.
Iorfa Jnr was on the radar of coach Samson Siasia ahead of the 2016 Olympic Games and was called up for a Dream Team VI training camp in 2014 but declined the invitation.
Super Eagles coach Gernot Rohr previously held talks with Iorfa about the possibility of playing for Nigeria and those discussions were positive.
Providing an update on the international future of the Sheffield Wednesday number 27, Iorfa Snr told allnigeriasoccer.com: "Dominic was invited before. I will advise him to play for Nigeria but Nigeria have to talk to him. When Nigeria talk to him it's up to him to say yes he'll play.

"If he wants to play for Nigeria and at the end of the day Nigeria didn't invite him, what will you do? These are young players, Nigeria have to show their intention.

"I remember when Ikeme was at Wolverhampton Wanderers, Rohr went there and spoke to him and Ikeme, that time he was only 22 so he was interested to come and willing to play.

"Even Ikeme told him that he should come so he was ready. Now he moved to Sheffield Wednesday, he's doing well so it's for Nigeria to show their intention.

"If they talk to him he will now prepare his papers to change allegiance to Nigeria, he has played for England youth team up to U21.

"I spoke to him last week and he's ready to play for Nigeria".
The 25-year-old Iorfa, who was born in Southend-on-Sea, England, became provisionally cap-tied to England when he featured in an U21 EURO qualifier against Kazakhstan in October 2015.
Ifeanyi Emmanuel
Copyright ANS