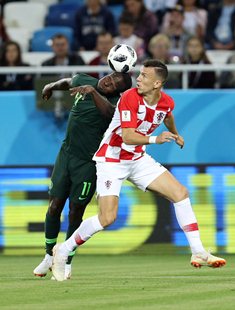 Nigeria manager Gernot Rohr has rued the retirement of three of his key players to the 2018 World Cup in Russia.
While Victor Moses retired from international footballer after the tournament in Russia, Manchester United striker Odion Ighalo and John Obi Mikel followed in the footsteps of the winger by making their final appearances in a Super Eagles shirt at the 2019 Africa Cup of Nations.
With the exception of Ighalo, the two remaining players with a connection with Chelsea were key members of the Super Eagles squad that won the 2013 AFCON and featured in two World Cups.
Moses made 38 appearances for Nigeria scoring 12 goals, Mikel played 90 times and netted six goals while Ighalo had 35 caps and 16 goals to his name.
When asked by the official website of FIFA how he felt about their decisions to retire from the national team, Rohr replied : "We were sorry Moses retired. The same applies to Obi Mikel and Ighalo, because they’re fantastic players.
"They decided to retire for family reasons or to play in China and focus on their club careers, and we respected their decisions."
The Nigeria Football Federation have attempted to convince Moses and Ighalo to return to the Super Eagles without success.
Igho Kingsley
Photo Credit : thenff.com
Copyright ANS