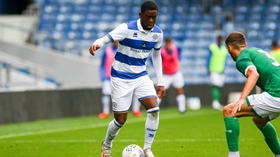 Nigerian striker Odysseus Alfa has opened his goalscoring account for Queens Park Rangers U23s in the new season but his goal was only a consolation with the Hoops losing 2-1 to Millwall in a London derby on Tuesday afternoon, allnigeriasoccer.com reports.
Manager Paul Hall picked Aramide Oteh and Olamide Shodipo in his starting lineup and brought on Alfa for the start of the second half.
Queens Park Rangers were a goal down two minutes after the restart through an own goal from Gubbins before Alexander wrapped up the points when he doubled the advantage with ten minutes remaining.
Oteh had come close to scoring for the home team but saw his effort clip the right-hand post in the 73rd minute.
Alfa reduced the deficit when he tucked home Hamalainen's cross in the 83rd minute.
Queens Park Rangers have loaned out the 21-year-old to non-league clubs Billericay Town and Maidenhead United, and Spanish side Atlético Baleares to enable him gain senior experience ahead of a potential debut for the senior squad.
Next up for QPR is a visit to Crewe Alexandra after the international break.
Ifeanyi Emmanuel
Photo Credit : qpr.co.uk
Copyright ANS