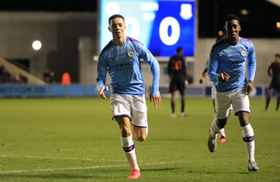 Manchester City registered an emphatic 4-0 victory over League Two side Scunthorpe United at the Sands Venue Stadium in an EFL Trophy clash on Tuesday evening, with Nigerian winger Samuel Edozie opening his account for the 2020-2021 season, allnigeriasoccer.com reports.
Despite being eligible for the U18s, the 17-year-old has apparently made the step up to the development squad considering the fact that he has not figured for the age group this term.
Edozie was named in the starting lineup against Scunthorpe United along with central defender Nathanael Ogbeta and a third player of Nigerian descent in former Leicester City schoolboy Camron Gbadebo was not utilized off the bench for the Citizens.
Manchester City doubled their lead through Edozie thirteen minutes into the second half, the winger slotting home assisted by Alpha Dionkou.
In the 66th minute, Edozie wrapped up the scoring, cutting onto his right foot and curled the ball in, settling the match as a contest in the process.
The former Millwall youngster has started all the four matches played by Manchester City U21s and U23s this term, and bagged an assist in the entertaining 3-3 draw with Derby County on September 12.
Edozie signed his first professional contract with Manchester City last month.
Ifeanyi Emmanuel
Photo Credit : mancity.com
Copyright ANS