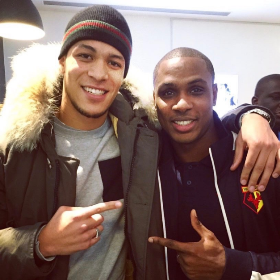 William Troost-Ekong has admitted that he asked his former Super Eagles teammate Odion Ighalo for advice before sealing a move to Watford.
Troost-Ekong ended his two-year association with Udinese after inking a multi-year contract with Watford on Tuesday.
The Nigeria assistant captain and Ighalo used to room together before the Manchester United striker called time on his international career.
Ighalo racked up 40 goals and eleven assists in 100 appearances for Watford in all competitions during a two-and-a-half-year stint with the Hornets.
"Ighalo used to be my roommate. I spoke to Odion last week. He only had good things to say about the club," Troost-Ekong said to Watford's official Twitter account.
"He’s a great guy, a fantastic player and like a big brother for me."
Troost-Ekong's first club in England was non-leaguers Bishop's Stortford, who are based in Hertfordshire like Watford, followed by moves to Fulham and Tottenham Hotspur.
Igho Kingsley
Photo Credit : watfordfc.com
Copyright ANS