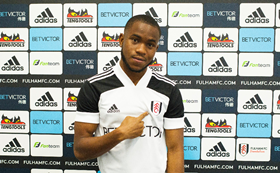 English Premier League side Fulham have confirmed the signing of former Everton winger Ademola Lookman on a season-long loan from Bundesliga outfit RB Leipzig.
The 2017 FIFA U20 World Cup winner, who has pledged his international future at senior level to the Super Eagles, is the second London-born Nigerian player to join Fulham on loan in the ongoing transfer window, after Torino-owned fullback Ola Aina.
Lookman is returning to England as he aims to improve his chances of playing first team football after falling out of favour at RB Leipzig, for whom he made two starts over the course of last season.
In his first words after the deal was confirmed, Lookman told Fulham's official website : "I’m glad to have it over the line and done now. I'm glad I can be here to help the team.

"Ademola, in his young career, has gained experience in the Premier League and Bundesliga and contributed in England’s 2017 Under-20 World Cup win, and we believe that he’s a very good addition to our squad! Come on Fulham!"
Lookman made 36 appearances in total in the Premier League, scoring once before moving to Germany.
Igho Kingsley
Photo Credit : fulhamfc.com
Copyright ANS