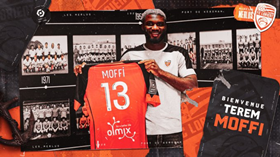 With a statement on their official website, French Ligue 1 side FC Lorient have confirmed the signing of former Golden Eaglets striker Terem Moffi from Belgian First Division A club KV Kortrijk.
The 21-year-old has put pen to paper on a four-year contract with FC Lorient who were promoted to the top-flight at the end of last season after winning the Ligue 2.
Moffi is the first Nigerian player in history to join FC Lorient and has moved to a big five European League club less than a year after featuring for FK Riteriai in Lithuania.
The young attacker looked really bright in the second half of last season at KV Kortrijk, scoring 4 goals in seven league matches.
"I am very honored to wear the Lorient colors and to play in Ligue 1 Uber Eats. I have worked a lot in recent seasons to get this wonderful opportunity," Moffi told Lorient's official webpage.
"I join a high quality group, with talented players, and it's up to me now to show my qualities to impose myself among the Merlucciidaes.
"I can't wait to make my debut with FC Lorient and make my contribution to this club which has placed its trust in me".
Moffi began his professional career in Europe with Lithuanian outfit FK Kauno Žalgiris.
Ifeanyi Emmanuel
Photo Credit : fclweb.fr
Copyright ANS