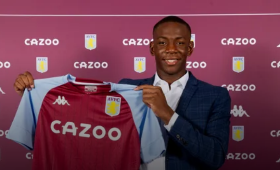 Through their official website, English Premier League side Aston Villa have announced the signing of prolific Nigerian striker Ruben Shakpoke who wore the colours of Norwich City's youth team last season.
Allnigeriasoccer.com exclusively reported exactly two months ago that Aston Villa were working on a deal to sign Shakpoke but face competition from abroad in the form of PSV Eindhoven, and Villa have confirmed as much, stating that he interested a number of suitors at home and abroad before they won the race for his signature.
Aston Villa Academy manager Mark Harrison said : "We’re delighted to announce Ruben’s signing and welcome him to the club.

"He has joined us after a lot of hard work was put in during our recruitment process and I thank everyone for their efforts.

"We’re looking forward to working with Ruben and developing his talents".
Shakpoke was on the books of Norwich City for five years and departs the Canaries after making one appearance in the U18 Premier League and also played for the age group in friendly matches.
Ifeanyi Emmanuel
Photo Credit : avfc.co.uk
Copyright ANS