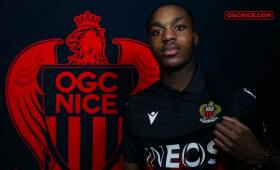 Legendary Arsenal captain Patrick Vieira has brought in a new striker in the shape of Irish-Nigerian Deji Sotona to OGC Nice, the French Ligue 1 club have announced via their official website.
The 2002-born Sotona has joined OGC Nice after turning down a professional contract at Premier League side Manchester United.
The pacy striker opted to move on to pastures new because he was not assured of first-team opportunities at Old Trafford but he is seemingly in contention to make his professional debut this season with OGC Nice revealing that he has been signed for the first team.
Born in Waterford, Sotona has played non-binding games for Republic of Ireland's U15 and U16 national teams.
In his final season at United, he scored five goals and provided two assists in 20 appearances combined in the U18 Premier League, FA Youth Cup and EFL Trophy.
Super Eagles scout Victor Agali and retired Nigeria national teamer Onyekachi Apam previously played for OGC Nice.
Igho Kingsley
Photo Credit : ogcnice.com
Copyright ANS