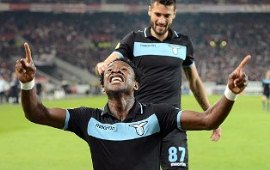 Allnigeriasoccer.com can exclusively report that Danish Superliga side SonderjyskE are on the brink of announcing the capture of experienced Nigeria international Eddy Onazi.
The central midfielder has ended speculation about his future by agreeing a deal with SonderjyskE after passing his medical with flying colours on Friday, October 2.
Onazi has put pen to paper on a three-year contract, keeping him at SonderjyskE until the end of the 2022-2023 season.
The 2013 Africa Cup of Nations winner was linked with possible moves to clubs in Italy and Serbia before the Danish top-flight club won the race for his signature.
He is moving to SonderjyskE as a free agent after terminating his contract with Denizlispor due to unpaid wages.
Before joining Denizlispor in January 2020, Onazi wore the colours of Trabzonspor for three and a half seasons.
The former Lazio star has made 26 appearances in European competitions, comprising 24 in the Europa League and two in the Champions League qualifiers.
Onazi links up with Nigerian winger Rilwan Hassan at SonderjyskE.
Ifeanyi Emmanuel
Copyright ANS