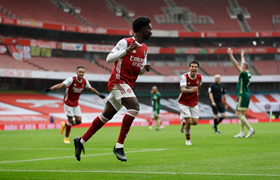 Bukayo Saka netted his first-ever goal at the Emirates Stadium as Arsenal returned to winning ways in the Premier League, beating Sheffield United 2-1 on Sunday afternoon.
A couple of goals after the hour mark got the win for Mikel Arteta's team, Pepe doubled the advantage with a lovely goal having come off the bench after Saka had opened the scoring with a good header, assisted by Hector Bellerin.

David McGoldrick with the first goal of the campaign for Sheffield United gave them hope in the 84th minute but it was four straight defeats for the Blades.

Saka, who is being courted by the Nigerian Federation to switch allegiance to the Super Eagles but has a chance to make his competitive debut for the Three Lions in the coming days, was delighted to receive his first call-up to England's senior team and net his maiden goal in London.
In an interview with Sky Sports monitored by allnigeriasoccer.com, Saka said post-match : "I just thank God because all the things happening to me I feel so blessed, like the England call-up and then today with the goal.

"I don't get a lot of headers but this one came so perfectly to me I had to put it in and I went with full confidence and luckily it went in.

"I'm trying to do my best anytime the boss picks me is for a reason, he has confidence in me so I try to repay the trust and faith that he puts in me.
"I told Hector what a cross it was because it was perfect, it's the type of patterns we work on in training everyday to build up and attack the wide areas and get crosses in, and I made sure I was there at the back post and luckily it came to me".
Asked if he was going to celebrate, the Arsenal number 7 replied : "I don't have enough time you know because obviously I'm off to international (duty) early tomorrow morning."
Saka's other goals for Arsenal's first team came in away matches against Eintracht Frankfurt and Standard Liege in the Europa League, Wolverhampton Wanderers in the Premier League and Bournemouth in the FA Cup.
Ifeanyi Emmanuel
Photo Credit : arsenal.com
Copyright ANS