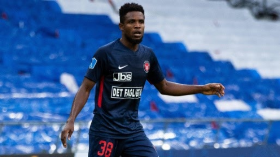 FC Midtjylland director Claus Steinlein has played down speculation linking Super Eagles invitee Frank Onyeka with a departure from the Danish champions in the summer transfer window.
The central midfielder was not in Midtjylland's matchday 18 for the 2-2 draw with Horsens on Sunday evening suggesting that a transfer was in the offing but he was omitted due to squad rotation, according to The Wolves chief.
It wasn't the first time Onyeka has not been in the 18 for a Danish Superliga match this term as he wasn't selected for the fixtures against SönderjyskE and Lyngby BK.
Speaking to TV3 Sport (via Bold.dk), Steinlein explained : "Priske (FCM coach, ed) has rotated and the players are here too when the transfer window closes on Tuesday. We have come a long way with this squad.
"It is now that we have to prove that we can do both in Europe and in the Super League. It requires a top level but also that we have some breadth in the squad.

"If we are to sell our players, it must be due to very large offers. They have not been there yet."
Onyeka is expected to report for international duty with the Super Eagles early this week ahead of a potential debut against either Algeria or Tunisia this month.
Igho Kingsley
Photo Credit : fcm.dk
Copyright ANS