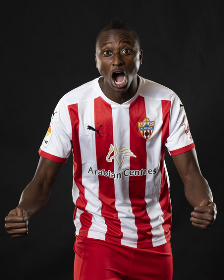 Spanish Segunda Division side UD Almeria have officially announced the signing of former Nigeria U23 international Sadiq Umar from Serbian giants Partizan Belgrade.
The 23-year-old has put pen to paper on a five-year contract that will keep him at the Rojiblancos until the end of the 2024-2025 season.
The Football College Abuja product was linked with a plethora of clubs in Europe after catching the eye for Partizan last season with 17 goals from 39 matches in all competitions while producing seventeen assists.
And he has proved that his performance last term was no fluke having registered his name on the scoresheet six times in 10 matches in the Serbian Super Liga in the new campaign.
Sadiq has previously represented Spezia, Lavagnese, Roma, Bologna, Torino, NAC Breda, Glasgow Rangers and Perugia.
He was the joint-top scorer for Nigeria at the 2016 Olympic Games with four goals.
For the rest of the 2020-2021 season, Sadiq will wear the number 9 jersey at Almeria.
Igho Kingsley
Photo Credit : udalmeriasad.com
Copyright ANS