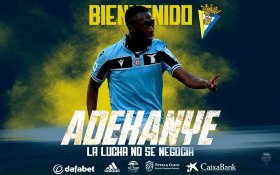 Through their official website, La Liga club Cadiz have confirmed the signing of Nigerian-born winger Bobby Adekanye from Italian side Lazio.
Adekanye is returning to Spain six years after he was forced to depart Barcelona because of his improper signing by the Spanish giants, bringing an end to his rise through the La Masia ranks.
A former Netherlands U17 international, the 21-year-old will spend the remainder of the 2020-2021 season on loan at Cadiz, who have in their ranks 2016 Olympic Games medalist Saturday Erimuya.
He has found playing opportunities few and far between since joining Lazio in the summer of 2019, making only two starts from a possible 50 across all competitions.
Adekanye spent time with the academy teams of Alphia, Ajax Amsterdam and PSV Eindhoven before moving to Liverpool, where he spent four years.
Cadiz, who have accumulated seven points from their opening five matches, travel to Real Madrid in their first game after the international break.
Ifeanyi Emmanuel
Copyright ANS