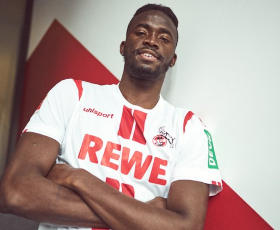 According to information from the online edition of German newspaper Bild, Bundesliga club Cologne were interested in signing Dutch-Nigerian striker Joshua Zirkzee on loan this summer.
Cologne Managing Director Horst Heldt contacted Bayern Munich's sports director Hasan Salihamidzic in August and asked about the possibilities of a Zirkzee loan but his request was turned down.
At that time, Bayern Munich wanted to retain Zirkzee because he was earmarked as a backup to Polish striker Robert Lewandowski.
Now the situation of Zirkzee has changed with Bayern Munich signing former PSG star Eric Maxim Choupo-Moting on transfer deadline day and the arrival of the Cameroonian will push the Netherlands youth international down the pecking order at the Bavarians.
Former Golden Eaglets striker Tolu Arokodare was one of the offensive players signed by Koln after Bayern Munich refused to do business.
Arokodare has played two games as a substitute since his loan move to the Billy Goats on September 18.
Igho Kingsley
Photo Credit : fc.de
Copyright ANS