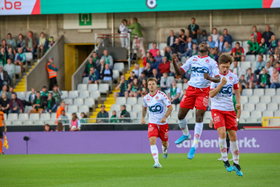 Belgian First Division A side K.V. Kortrijk have officially announced that they have parted company with two Nigerian players, Imoh Ezekiel and Abdul Ajagun.
The attacking midfielder and striker's contracts were terminated by mutual agreement one year before expiration.
While Ajagun was on the books of Kortrijk for three years after joining from Greek giants Panathinaikos, Ezekiel was acquired by the club in 2018.
The former Flying Eagles captain is credited with 74 games, scoring ten goals and providing eight assists.
2016 Olympic Games bronze medalist Eziekiel played a total of 39 games and had six goals to his name with two assists.
Once a household name in Belgium largely due to his exploits with Standard Liege, the 36 Lion product has also worn the colours of Al-Arabi, Anderlecht, Konyaspor and Las Palmas.
Former Dolphins star Ajagun previously played for Levadiakos, Roda and Omonia on a temporary basis.
Igho Kingsley
Photo Credit : kvk.be
Copyright ANS