...the complete Nigerian football portal
Subscribe
Swedish Club Hammarby To Run The Rule Over 'Next Akinkunmi Amoo' In Lagos Next Month
Published: October 10, 2020 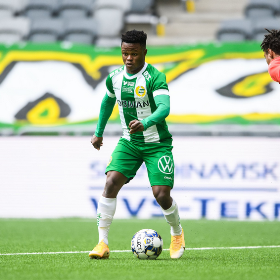 Allnigeriasoccer.com can confirm that Mikael Hjelmberg, chief scout of Hammarby, will travel to Lagos next month to run the rule over the 'next Akinkunmi Amoo' with a view to a possible move to the Swedish Allsvenskan side as from the January transfer window.
Hjelmberg will be accompanied on the trip by renowned Swedish agent Patrick Mork, who used to look after former Kalmar striker Abiola Daudu, and is the executive director of Global Soccer Management.
As part of the deal taking Amoo to Hammarby, an agreement was reached with Sidos Football Academy that will see the talent spotters of the Swedish club visit Nigeria twice a year to scout for promising players.
The first part of the scouting programme is ongoing in various locations in Nigeria and the players judged to be outstanding will be further evaluated by Hjelmberg and Mork upon their arrival in Lagos on November 12.
The final part of the scouting programme which comes to a conclusion on November 20 is scheduled to hold at the National Stadium in Surulere, Lagos.
Sporting Directors of Watford, Udinese and Granada have been invited by Sidos FC to attend the scouting programme next month.
Ifeanyi Emmanuel
Copyright ANS