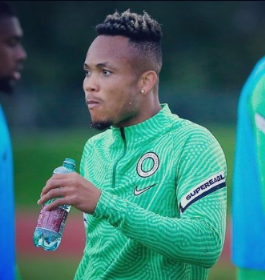 Super Eagles coach Gernot Rohr was impressed by Chidera Ejuke's impact from the bench in Tuesday's 1-1 draw with Tunisia in an international friendly staged at Jacques Lemans Arena (St. Veit an der Glan).
The CSKA Moscow summer signing replaced Samuel Chukwueze with twelve minutes remaining and showed his threat and trickery from the right side of the Super Eagles attack.
Ejuke used his dribbling skills to keep hold of the ball and glide past the Tunisian players with ease.
Rohr was pleased to see the former Liverpool trialist make an impact off the bench and also had good words to say about the young goalkeeper Maduka Okoye, who went the distance in the two friendlies.
"It will be more difficult for me to make the next list because we have some new players - Ejuke also is interesting, coming in, helping a lot, showing some qualities," Rohr told the Super Eagles Media Team post-match.

"We saw a lot of new players, we had eight new players, the goalkeeper position now is giving us good confidence.

"Maduka still has to work so it's very positive. You know after 11 months to play again is not easy, it was difficult for the players and staff."
Chidozie Awaziem, Jamilu Collins and Cyriel Dessers were the other players utilized off the bench in the second half against Tunisia.
Ifeanyi Emmanuel
Copyright ANS