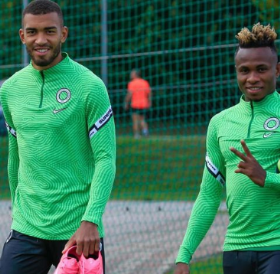 Nigeria manager Gernot Rohr has strongly hinted that Porto left-back Zaidu Sanusi, Sparta Rotterdam goalkeeper Maduka Okoye and Hoffenheim central defender Kevin Akpoguma have sealed their places in the Super Eagles squad ahead of next month's 2021 Africa Cup of Nations qualifiers against Sierra Leone.
The three players were involved in the two matches played by the national team this month and made a mark with their performances.
Okoye made a series of saves and prevented the Super Eagles from losing vs Tunisia when he clawed over the bar a tricky lob from Ben Slimane Anis two minutes from time; Akpoguma showed his versatility by switching from a fullback position to center back; Sanusi was fearless in defending and provided an attacking outlet.
"We saw the confirmation for some of our players like in the goalkeeper (Okoye) position, like in the left-back (Sanusi) position, like also the new defender (Akpoguma) who is coming in choosing Nigeria instead of Germany, so he can play in the right side, he can play in the middle," Rohr said to the Super Eagles Media Team.

"We missed two more players because Kalu and Ekong were not here.

"I think the team is in a good shape, we worked well, we have more options now for our list."
Of the 26 players invited to the Super Eagles training camp in Austria, only four in the shape of Dele Alampasu, Mathew Yakubu, Ola Aina and Tobias Lawal did not taste action in the two friendlies.
Ifeanyi Emmanuel
Copyright ANS