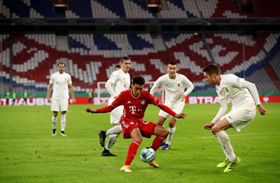 Chelsea Academy product Jamal Musiala made his full debut for Bayern Munich and it came in a DFB Pokal first round clash against Oberliga side Düren Merzenich on Thursday night, allnigeriasoccer.com reports.
Prior to yesterday's fixture, the England youth international made four appearances off the bench for the German champions in the Bundesliga, logging 62 minutes in total.
Now, Musiala has 152 minutes under his belt for Bayern Munich's first team having put in a solid 90-minute shift against Düren Merzenich.
According to the statisticians at OPTA, Musiala is the second youngest player to feature for Bayern Munich in the DFB Pokal aged 17 years and 232 days and only Austrian-born defender of Nigerian descent David Alaba has been younger (17 years and 231 days), meaning the attacking midfielder narrowly missed out on breaking the club record by one day.
Musiala started in a five-man midfield alongside Javi Martínez, Marc Roca, Douglas Costa and Thomas Müller.
He almost got on the scoresheet in the 64th minute after some excellent footwork in the penalty area but saw his effort hit the post.
Bayern Munich advanced to the second round of the DFB Pokal thanks to a brace from Eric Maxim Choupo-Moting and Müller's goal from the spot.
Ifeanyi Emmanuel
Photo Credit : fcbayern.com
Copyright ANS