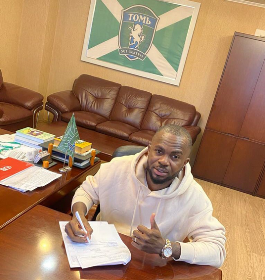 Russian Football National League side Tom Tomsk have officially announced the signing of former Flying Eagles dazzler Chidi Osuchukwu.
Osuchukwu's last club Rukh Brest previously claimed that they had reached an agreement with Khimki on the transfer of Chidi Osuchukwu to the Russian Premier League newcomers, but the deal apparently collapsed, going by the latest development.
In a statement on Friday morning, Tom Tomsk confirmed that Osuchukwu is the first African player in history to sign for the club.
"Chidi Osuchukwu is the first African in the history of Tom Tomsk! Chidi's last club was Rukh Brest from Belarus," Tom Tomsk said in a statement via Twitter.
"The newcomer contract's is valid until the end of the season. Osuchukwu will perform with the 11th number.

"Welcome to Tom Tomsk, Chidi".
Osuchukwu joined Rukh Brest in the winter transfer market after spells with Sporting Braga, Dynamo Brest and previously played for Dolphin FC in his homeland.