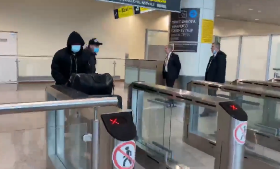 Former Nigeria international Victor Moses landed in the Russian capital Moscow on Friday, a day after his loan move to Spartak was confirmed by Chelsea and their Russian counterparts.
Spartak Moscow have uploaded  a 26- second video via Twitter in which Moses was arriving at the airport.
Spartak Moscow have displayed on a screen in front of their home ground, Otkrytie Arena, a photograph of Moses with the caption "Welcome Victor Moses!".
The Reds and Whites have confirmed that the 2013 Africa Cup of Nations winner has joined the club on loan for the remainder of the season with a purchase option included in the deal, which suggests that he extended his contract with Chelsea before moving to Russia.
Moses is set to become the fourth Nigerian player to represent Spartak Moscow after Emmanuel Emenike, Okon Essien and Samuel Ogunsania.
Retired Super Eagles striker Peter Odemwingie was heavily courted by Spartak Moscow during his Lille days but eventually joined their city rivals Lokomotiv Moscow in 2007.
Previously, Moses spent time on loan at Liverpool, Stoke City, West Ham and Fenerbahce.
Ifeanyi Emmanuel
Photo Credit : spartak.com
Copyright ANS