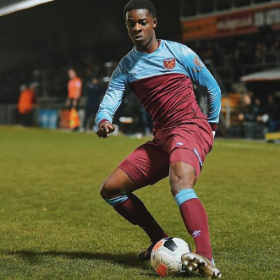 Former Manchester United striker Mipo Odubeko has won West Ham United's Goal of the Month award for September 2020 for his stunning strike against League Two side Southend United in the EFL Trophy, informs the Hammers on their official website.
Eighty-three minutes into the game staged at Roots Hall, Odubeko unleashed a brilliant left-footed shot from just outside the area to make it 2-0.
Odubeko's strike, his second of the evening, earned the most votes from the Hammers supporters from the six goals shortlisted.
The 17-year-old has not been available for selection since his two-goal heroics after suffering a training ground injury before the trip to Chelsea U23s.
Since joining West Ham in October 2019, the prolific striker has scored on his debuts for the club in the U18 Premier League, FA Youth Cup, Premier League 2 and EFL Trophy.
Odubeko, who has represented the Republic of Ireland at U17 level, moved to England in August 2015 and was at Manchester City before joining their city rivals United in 2016.
Igho Kingsley
Copyright ANS