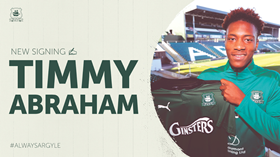 Allnigeriasoccer.com's round-up of the Nigeria-eligible players who changed clubs on deadline day in the English Football League.
Fulham's Timmy Abraham, younger brother of Chelsea striker Tammy Abraham, has joined League One side Plymouth Argyle on loan until January 2021, his second loan move since his arrival at the Cottagers, having spent a portion of last season at Bristol Rovers.
There were two confirmed loan moves involving Nigerian youngsters on the books of Championship outfit Queens Park Rangers.
The 22-year-old striker Aramide Oteh will spend the remainder of the season at League Two side Stevenage and is in contention to make his debut against Forest Green Rovers on Saturday.
Oteh previously spent time on loan at Walsall and Bradford, scoring 5 goals combined in 35 appearances.
Winger Olamide Shodipo, 23, a former Republic of Ireland U21 international, has been farmed out on loan to League One side Oxford United for the remainder of the season, with the Hoops having the option to cut short his loan spell in January 2021.
2001-born striker Jordan Adebayo-Smith has departed League One club Lincoln City by mutual consent.
He made one appearance for the Imps' first team - against Accrington Stanley in the EFL Trophy back in December 2018.
Ifeanyi Emmanuel
Photo Credit : pafc.co.uk
Copyright ANS