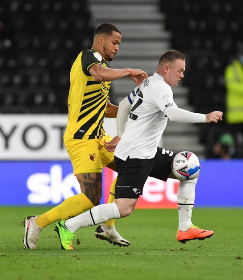 Super Eagles assistant captain William Troost-Ekong helped Watford register a 1-0 win against Derby County at the Pride Park Stadium on his Championship debut on Friday night.
The former Tottenham Hotspur youth-teamer limped off the pitch in the 71st minute after suffering a hamstring injury.
Watford head coach Vladimir Ivić is hoping that Troost-Ekong's injury is not serious and revealed that his new signing from Udinese was replaced in order not to aggravate the problem.
Providing an injury update on Pedro and Troost-Ekong, Ivic told Watford's official website : "I believe it’s not something major, he just went off because he felt tired.

"Same with Troost-Ekong. He felt something with his hamstring, but we changed him at the right moment and it’s not something dangerous with him, we hope he is okay."
Nigeria manager Gernot Rohr is monitoring the fitness of Glasgow Rangers' Joe Aribo and Stoke City loanee Oghenekaro Etebo before announcing his roster for next month's games with Sierra Leone, and Troost-Ekong could join that list depending on how his injury evolves.
Ifeanyi Emmanuel
Photo Credit : watfordfc.com
Copyright ANS