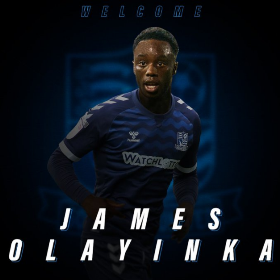 The English Football League ratified the transfer of Arsenal midfielder of Nigerian descent, James Olayinka to Southend United on Saturday, a day after the close of the summer transfer window.
Arsenal have confirmed that the highly-rated youngster has been loaned to the Seasiders until the end of January 2021.
This is Olayinka's second loan move since joining the Gunners thirteen years ago as he spent the second half of last season at Northampton Town, helping them secure promotion to the third tier via the playoffs.
"We’re really pleased to bring James in. He’s been on our shortlist for some time and we've had him watched a number of times," Southend United coach Mark Molesley told the club's official website.

"He’s been well identified to us from our recruitment [team] and comes well recommended from people in and around Arsenal.

"He’s had a very good education at Arsenal and we’re indebted to them for trusting us with one of their young talents.

"I said if we felt we could add value we’d always look to do that and we’ve certainly done that with James."
Olayinka is unavailable for today's game against Cheltenham Town and will train for the first time with his new teammates on Monday before their meeting with Salford City.
Igho Kingsley
Photo Credit : southendunited.co.uk
Copyright ANS