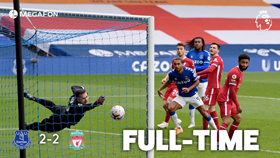 Carlo Ancelloti's Everton are guaranteed to remain top of the English Premier League after match day five following their 2-2 draw with Liverpool in the Merseyside derby on Saturday afternoon.
Sadio Mane gave the visitors the lead inside three minutes but the two teams were level at the break when Michael Keane thumped his header through the hands of Adrian.
Mohamed Salah saw his 72nd minute effort cancelled out by Everton's red-hot striker Dominic Calvert-Lewin at minute 81, and Jordan Henderson thought he had won the game for the Reds right at the death only for his goal to be ruled out for offside after a VAR review.
Alex Iwobi came off the bench to replace Abdoulaye Doucoure in the 78th minute and put Everton in a position to win the game when he won a free-kick in the closing seconds.
The Nigeria international produced an exceptional piece of skill to wriggle himself out of a tight situation and Liverpool fullback Andrew Robertson had no choice but to foul him.
Here's what fans said about Iwobi's brilliant skill on Twitter :
@Jossy_Legend :"Iwobi skinning your favourite LB. At some point with time elapsing I wondered if he'd get the chance to do it.."

@USAToffeePod : "Can we talk about the Iwobi skill to win that last free kick?"

@JoeSolan1878 : "Anyone else just see Iwobi turn Robertson inside out or just me".

@Veenie02 : "Iwobi with that lateral heel to heel".

@Rasignificant1 : "Aside that dribble attempt against Liverpool, Iwobi was a waste for the while he played."

@StraightRight90 : "How did Robertson not get booked for last minute trip on iwobi".

@Tejiri_tej : "That skill Iwobi pulled tho'"

@arnie1886 : "No way Ancelotti has Iwobi sending Robertson for a kebab".

@_lollipopping : "hope yall saw what iwobi my husband did there".

@helichito : "Everybody for viewing center started shouting when Iwobi did that skill".

@AdamFStapleton : "Did you see the Iwobi skill?? I saw it and thought that’s a bit of Saul that is!".

@Mrbeewang : "Great game, that double touch from iwobi, I like the draw tho".