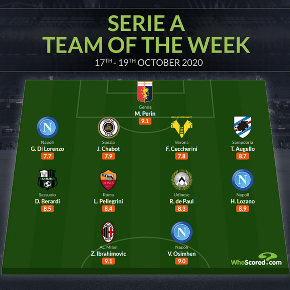 Football statistics website Whoscored has unveiled its Team of the Week for the Italian Serie A following the conclusion of the matchday four fixtures.
Victor Osimhen has been recognized for his excellent performance in Napoli's 4-1 rout of Atalanta at the Stadio San Paolo, where the Nigeria international opened his account for the Blues, with the number 9 making the Team of the Week.
In a 4-4-2 formation, the 21-year-old is partnered in attack by the experienced AC Milan striker Zlatan Ibrahimovic who is 17 days shy of his 40th birthday.
The former Manchester United star has been included in the Team of the Week after netting a three-minute brace in the Milan derby vs Antonio Conte's Inter.
Of all the players who featured in the TOTW, only Ibrahimovic and Genoa goalkeeper Mattia Perin (both 9.1) rated higher than Osimhen who received a 9.0 rating.
Against Atalanta, Osimhen finished with a game-high four shots on target, won a joint team high two aerial duels, was the most fouled player on the pitch, winning five free-kicks for the home team.
The Super Eagles star made two key passes, completed one dribble, and was successful in 71.4 percent of his passes.
Ifeanyi Emmanuel
Copyright ANS