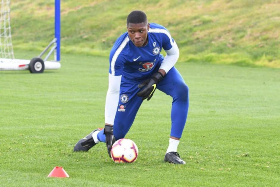 Chelsea have submitted their squad for the English Premier League following the conclusion of the summer transfer window and ahead of the deadline on Tuesday afternoon, allnigeriasoccer.com reports.
There are two separate lists - the main one containing a total of 25 players and another reserved for only U21 players irrespective of nationality.
For the 2020-2021 season, U21 players will have been born on or after 1 January 1999.
Chelsea boss Frank Lampard has supplemented his squad with 59 players classed as U21 players and scholars of which four are teenagers eligible to represent the Nigeria national teams.
Midfielder Faustino Anjorin, goalkeeper Prince Adegoke, fullback Derrick Abu and striker Bryan Fiabema could be called upon for Premier League matches if the need arises.
A fifth player in Tariq Uwakwe has also been named among the U21 players but the midfielder cum wing-back has been loaned out to EFL League One club Accrington Stanley.
Of the aforementioned players, only England U19 international Anjorin has debuted for Chelsea in the Premier League and it came against Everton pre-lockdown.
Ifeanyi Emmanuel
Copyright ANS