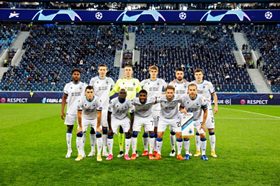 Belgian champions Club Brugge won for only the second time in nineteen UEFA Champions League outings thanks to an injury time winner from De Ketelaere against Zeni St. Petersburg at the Gazprom Arena on Tuesday evening.
Nigeria international Emmanuel Dennis opened the scoring for the Pro League side when he prodded in from close in the 63rd minute but the home team restored parity after an unfortunate own goal by goalkeeper Ethan Horvath in the 74th minute.
In the build-up to the game, Dennis stated that he only scored against the big teams and he kept his word by finding the net against the Russian champions.
However, the Club Brugge number 42 has set the record straight after revealing that he did not mean what he said.
"I am very happy with this victory. It's the first time I have won in the Champions League myself. It was a big team performance tonight," Dennis told VIER.

"Everybody gives everything all the time, has a lot of energy and we saw that tonight. I said that I only score goals against the big teams but that was a joke.
"I'm there to score goals anyway. We need to keep working hard in this group and then anything can happen."
Last season, Dennis got on the scoresheet against Real Madrid in the Champions League and Manchester United in the knockout round of the Europa League.
Igho Kingsley
Photo Credit : clubbrugge.be
Copyright ANS