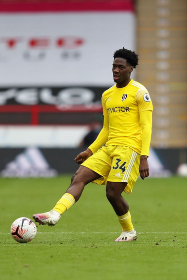 Torino-owned fullback Ola Aina is delighted to link up with his former Chelsea teammate Ruben Loftus-Cheek at Craven Cottage.
The Nigeria international has known the England midfielder most of his life as they both rose through the ranks at Chelsea and were key members of the Blues side that won the UEFA Youth League in 2015.
Aina and Loftus-Cheek were handed starts as Fulham were held to a 1-1 draw by Sheffield United on Sunday, October 18, with the Super Eagles star playing at right-back, behind the Chelsea loanee.
"Yes exactly, literally most of my life with Rueben and I know how Ruben likes to play, I know what type of passes he likes," Aina said to Fulham's official website.

"It was kind of familiar and comfortable just having Reuben there on the right side a little bit, it was good as well, it was a good feeling."
Aina was excited when news broke that Loftus-Cheek was set to join him at Fulham on transfer deadline day.
He said : "When I saw it on Sky, I texted him and I didn't get a reply for a couple of hours so I just put two and two together - he's definitely here so that was good".

Aina, who is on loan at Fulham until the end of the season, is poised to make his home debut for the Cottagers in a London derby against Crystal Palace this coming Saturday.
Ifeanyi Emmanuel
Photo Credit : fulhamfc.com
Copyright ANS