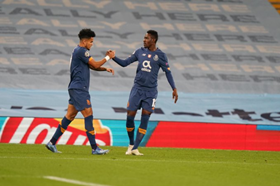 Allnigeriasoccer.com's round up of Nigeria-eligible players involved for their respective teams on matchday one of the UEFA Champions League.
At Saint-Petersburg Stadium, Club Brugge registered a 2-1 win over Zenit thanks to Charles De Ketelaere's winning goal in injury time.
Emmanuel Dennis was one of Club Brugge's top performers and opened the scoring when he prodded in from close range in the 63rd minute but the lead lasted only 11 minutes as goalkeeper Horvath scored an unfortunate own goal.
The Super Eagles striker was on the pitch for 82 minutes, teammate David Okereke was a non-playing substitute.
At Stamford Bridge, Faustino Anjorin was not in Chelsea's matchday squad in their goalless draw with Europa League holders Sevilla.
Manchester United beat PSG 2-1 at the Parc des Princes - Paris with Odion Ighalo watching proceedings from the bench for the entirety of the game.
Marcus Rashford was the Red Devils hero, scoring the game-winner three minutes from time.
Bruno Fernandes opened the scoring from the spot midway through the first half but the Ligue 1 side restored parity after an own goal from Anthony Martial in the 55th minute.
There was no Champions League debut for Rennes' Lesley Ugochukwu as his French club and an organized
Krasnodar played out a 1-1 draw at Roazhon Park (Rennes).
The Russian team fell behind in the 56th minute when Guirassy converted a spot kick but struck back with an equaliser from Ramírez three minutes later.
Former Nigeria U23 captain Azubuike Okechukwu is still on the mend so wasn't considered for İstanbul Başakşehir in their 2-0 loss to last season's surprise package RB Leipzig at the  RB Arena - Leipzig.
A first half brace from Angeliño secured three points for the German Bundesliga team.
Promising teenagers Jamal Musiala and Joshua Zirkzee were unused substitutes as Bayern Munich began the defence of their title with a 4-0 rout of Atlético Madrid at Football Arena in Munich.
Kingsley Coman opened and closed the scoring, Leon Goretzka and Tolisso also got on the scoresheet.
At the Etihad Stadium, Manchester City came from behind to beat Porto 3-1 with Super Eagles left-back Zaidu Sanusi making his full Champions League debut.
While the left-back was in action for 77 minutes, Manchester City's Felix Nmecha was an unused substitute.
Luis Díaz's goal in the 14th minute was cancelled out by Agüero, a brilliant free-kick from Gündoğan made it 2-1 in the 65th minute and substitute Ferrán Torres added a third with 17 minutes remaining.
Frank Onyeka's Champions League debut didn't end well as FC Midtjylland were thrashed 4-0 by Italian visitors Atalanta at the MCH Arena.
Zapata, Gómez and Muriel found the net to give Atalanta a 3-0 lead at the break before Aleksei Miranchuk added further gloss to the scoreline at minute 89.
Onyeka did not finish the contest as he subbed out in the 87th minute.
Finally, Marvin Akinlabi was not included in the matchday squad for Real Madrid in their shock 3-2 loss to Shakhtar Donetsk at Estadio Alfredo Di Stefano.
The Ukrainians were 3-0 up at the break, scoring through Tetê, Varane (og) and Solomon, before second half goals goals from Luka Modric and Vinicius Junior made it 3-2.
Ifeanyi Emmanuel
Photo Credit : fcporto.pt
Copyright ANS