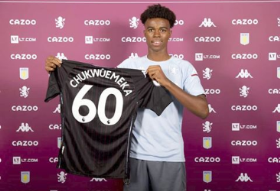 Nigeria-eligible midfielder Carney Chukwuemeka has ended speculation about his future after inking a new contract with English Premier League side Aston Villa.
Through their official website, Aston Villa have confirmed that the England youth international has signed his first professional contract without disclosing the length of the deal.
Chukwuemeka broke into Aston Villa's U23 squad in January 2020 while still a schoolboy after starring for the U18s, for whom he scored two goals while assisting six others in fourteen appearances.
Academy manager Mark Harrison stated: "We are delighted to see Carney sign his professional contract as this represents one of the key objectives of the football club, to develop homegrown players for our first team.

"We have been really pleased with his development over the last couple of years and feel this contract will provide him with the platform to continue to realise his potential and become a first-team player.

"Carney and his family have shown great commitment to his development and they also appreciate that the hard work continues.

"We will all work together to help him fulfil his dream of playing in our first team."
Chukwuemeka trained with Aston Villa's first team ahead of the new season, a testament to how highly-rated he is at the club.
Ifeanyi Emmanuel
Photo Credit : avfc.co.uk
Copyright ANS