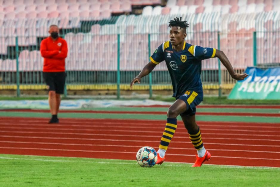 Metalist Kharkiv left back Chidera Kelit Anih has expressed desire to help his Ukrainian second-tier side gain promotion to the country's topflight at the end of the 2020/2021 season and also launch his international career with Nigeria.
The defender has made three appearances this season for the team currently placed second in the league table with 15 points from seven games with a match in hand.


Anih on Thursday spoke with allnigeriasoccer.com on the trajectory that his career is taking.
"My club narrowly missed promotion to the Ukrainian Premier League last season but we are bent on achieving that this season (2020/2021)," Anih stated.

"I have had to watch the ongoing European matches and I want to help my club achieve promotion to the Premier League so that we can work hard towards fulfilling such aspirations.

"Shakhtar Donetsk defeated Real Madrid 3-2 in the UEFA Champions League on Wednesday and that is an inspiration. We came close but hopefully this time next year, I will be playing in the first division," Anih enthused.

The Nigerian defender also hopes to become a Nigeria international in the not too distant future but agrees that he has to work his way up the ladder.

"The left back position is an interesting position really  arguably the ones that do more defensive duties," Anih said cheekily.

"I want to be a Nigerian international and play at the highest level for the country.  I do not want to represent another country.

"I agree that I cannot get my opportunity in the Super Eagles as there are more experienced players in my position there at the moment.

"So perhaps I would have to look forward to getting a chance  first in the youth teams like the U-20 or U-23 sides."

Nigeria's Flying Eagles side will take part in the WAFU Zone B mini tournament which serves as qualifiers to the 2021 Africa U-20 Nations Cup  and have been grouped along with Ghana and Cote d' Ivoire.

Metalist Kharkiv also have in their ranks a midfielder of Nigerian descent Denys Ndukwe who has taken up Ukrainian citizenship.