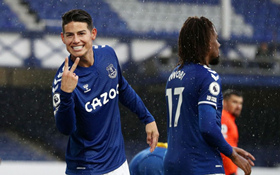 Alex Iwobi has been namechecked among three players in line to replace South American duo Richarlison and James Rodriguez in Everton's starting lineup in their clash with Southampton on Sunday.
While the Brazilian is suspended following his dismissal against Liverpool last weekend, the Colombian picked up an injury after a mistimed tackle with Virgil van Dijk.
For the first time since his first full season with Arsenal's first team, Iwobi has not started an English Premier League game after five rounds in the division.
Carlo Ancelotti hinted that Iwobi is a strong candidate to deputise for either Richarlison or Rodriguez and also revealed that Bernard and Anthony Gordon have an opportunity to play against the Saints.
"Alex is a player who works hard. He is fast and with his quality he can help the team be better in certain situations," the respected Italian football tactician told Everton's official website.

"He [potentially] has an opportunity to play but also we have Bernard and Anthony Gordon.

"We have a lot of opportunities to replace Richarlison and James. We are already moving on."
Iwobi's only start for the Toffees so far this season came in the League Cup win against Fleetwood Town at Highbury Stadium, where he put in a 90-minute shift.
Igho Kingsley
Photo Credit : evertonfc.com
Copyright ANS