...the complete Nigerian football portal
Subscribe
Retired Italy Midfielder Explains Why Gattuso Should Not Have Started Osimhen In Loss To AZ
Published: October 23, 2020 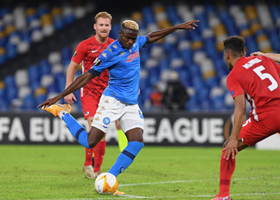 Former Italy international midfielder Roberto Rambaudi has explained why Napoli coach Gennaro Gattuso should not have started Victor Osimhen in his side's shock 1-0 loss to Dutch opponents AZ Alkmaar at Stadio San Paolo on Thursday.
The  AZ Alkmaar defence did a good job marking the Nigerian dangerman and prevented him from scoring before he was replaced in the 66th minute of the contest.
"Stanislav Lobotka had the opportunity to show his worth to everyone, he had the chance to play from the first minute, but it was absolutely not convincing," Rambaudi said to Canale 21.
"Against the Dutch team AZ Alkmaar I would not have deployed players who give points of a reference like Victor Osimhen, who found it difficult to play against such a closed defense.
"The Azzurri's performance was very disappointing, more was expected."
Osimhen made his debut in the Europa League against AZ Alkmaar, taking his appearances in European competitions to six, the others coming in last season's Champions League group stage.
Igho Kingsley
Photo Credit : sscnapoli.it
Copyright ANS