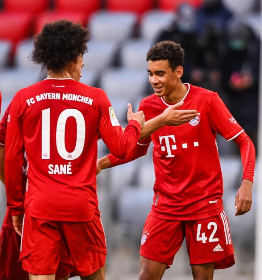 Chelsea Academy product Jamal Musiala was among the scorers as Bundesliga and European champions Bayern Munich thrashed Eintracht Frankfurt 5-0 on Saturday afternoon, allnigeriasoccer.com reports.
The attacking midfielder entered the game as a substitute in the 73rd minute for his eighth appearance for the first team of the Bavarians since his debut last season.
In the 90th minute, Musiala wrapped up the scoring when he dispatched the rebound after Goretzka's shot from close range was blocked by goalkeeper Trapp.
The 2003-born player eventually forced the ball home despite a crowded six-yard box and Austria star of Nigerian descent David Alaba was one of the first Bayern players that congratulated him following his second league goal of the season.
Musiala netted his first goal in Bayern Munich's colours in the opening day win against Schalke 04.
Born in Fulda – a city north east of Frankfurt - but raised in England, he is eligible to turn out for the national teams of Nigeria, England and Germany.
He was a member of the Fulham’s mixed U11 team that won the Premier League Schools Tournament in 2013, a squad captained by Ola Aina's brother Jordan.
Igho Kingsley
Photo Credit : fcbayern.com
Copyright ANS