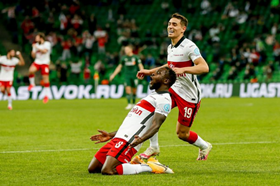 Former Everton and Spartak Moscow midfielder Diniyar Bilyaletdinov has warned Victor Moses to be prepared for what he will face in the Russian Premier League.
The Chelsea loanee did not waste time to open his account for the Muscovites, scoring on his full debut in today's win at Krasnodar and after 67 minutes of action spread across two matches.
Moses was not involved in the Cup match against Enisey as he stayed back in Moscow to work on his fitness and was replaced in the 67th minute today because manager Domenico Tedesco feared he would get injured if he stayed longer on the pitch due to his lack of match fitness.
Assessing the performance of the Nigerian star, Bilyaletdinov told Sport Express : "It's good that he started quickly: the second game practically, to count how many minutes he spent on the field, scored, that's good.
"But we look further, because our championship is unpredictable. What he will face next, he does not even know.
"Let's see how he will manifest himself. And so, of course, congratulations on the first goal."
Spartak Moscow number 8 Moses will be hoping to make his home debut for the table toppers in next Saturday's clash vs Rostov at the Otkrytiye Arena .
Ifeanyi Emmanuel
Photo Credit : spartak.com
Copyright ANS