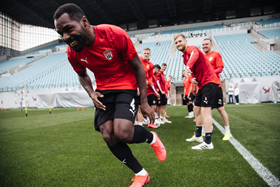 Lokomotiv Moscow loanee Bryan Idowu seems to have found his feet in recent matches for Khimki and the Russian-born defender could be pushing for a recall to the Super Eagles ahead of next month's 2021 Africa Cup of Nations qualifiers against Sierra Leone, allnigeriasoccer.com reports.
For the first time in his professional career, the Russian-born left-back has managed to find the net in back-to-back matches following his strike for Khimki in their 2-0 road win against FC Rostov on Sunday afternoon.
Last weekend, Idowu opened his account for the season but could not prevent his team from losing 3-2 to Spartak Moscow.
The 28-year-old also wrapped up the scoring today but this time it was a crucial second goal in the fourth minute of stoppage time that helped Khimki secure all three points.
With his rich vein of form, Idowu is sending the right message to Super Eagles manager Gernot Rohr before the German football tactician announces his roster for the upcoming AFCON qualifiers.
He has not played for the Super Eagles for two years with his last appearance coming against Uganda in a friendly back in November 2018 though he was a non-playing substitute in another friendly vs Ukraine in September 2019.
Igho Kingsley
Photo Credit : fckhimki.com
Copyright ANS