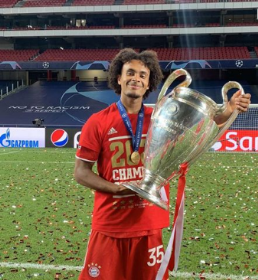 Netherlands U21 international of Nigerian descent, Joshua Zirkzee will sit out Bayern Munich's Champions League showdown with Lokomotiv Moscow at the RZD Arena on Tuesday evening, allnigeriasoccer.com reports.
The Super Eagles target was nowhere to be found in the matchday squad announced by Bayern Munich on Monday afternoon.
By all indications, Zirkzee is not injured considering the fact that he went the distance for Bayern Munich II in their 2-0 victory over SV Waldhof Mannheim in the German 3. Liga on Sunday, rather he has fallen down the pecking order of strikers.
The 19-year-old was not included in Bayern Munich's matchday squad in their last two Bundesliga matches and his most recent outing for the first team was against Borussia Dortmund in the Super Cup on September 30.
A return to the Netherlands on loan was on the cards in the summer transfer window but nothing came out it.
Meanwhile, Chelsea Academy product Jamal Musiala was among the 22 Bayern players that traveled to the Russian capital ahead of his potential debut in the Champions League.
The 2003-born attacking midfielder has been involved in every single game played by the Bavarians in the Bundesliga this season - five in total - in addition to appearances in the DFB Pokal and DFL Supercup.
Ifeanyi Emmanuel
Photo Credit : instagram.com/zirkzee
Copyright ANS