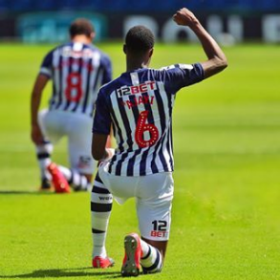 Former Tottenham Hotspur coach Tim Sherwood believes Semi Ajayi will benefit playing alongside Chelsea legend Branislav Ivanovic in the heart of West Brom's defence.
Baggies boss Slaven Bilic has reinstated the Super Eagles star into the starting lineup for the ongoing game against Brighton & Hove at the American Express Community Stadium and he's playing together with the Serbian for the first time.
With 262 Premier League appearances to his name, Sherwood has noted that Ivanovic's experience on and off the pitch will be valuable for the young West Brom defenders, Ajayi in particular.
Heading into the fixture vs the Seagulls, West Brom have one of the leakiest defences in the top-flight, with 13 goals conceded in 5 games, and only Liverpool and Fulham have let in more goals.
"Branislav Ivanovic is a decent player, he's a good professional, they will learn off him," Sherwood said on Premier League Productions just before the start of the game.
"Ajayi is going to learn with him - talking to him throughout the game - good English, I think he is a descent signing.

"Ivanovic will give them that, he's probably the best they could find at the time".
Ivanovic helped West Brom to keep a clean sheet on his Premier League debut but without Ajayi in the lineup.
Ifeanyi Emmanuel
Photo Credit : instagram.com/semishems
Copyright ANS