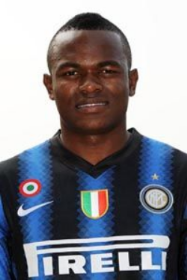 Former Nigeria international Victor Obinna has revealed that Jose Mourinho closely monitored the young players in the squad while he was coaching Inter Milan.
Obinna was a member of the Inter Milan team that won the Serie A in the 2008-2009 season under the tutelage of the famous Portuguese football tactician.
Mourinho brought the then 21-year-old winger into the first team fold at Inter Milan after starring for Nigeria at the 2008 Olympic Games, finishing as the second top scorer in  the tournament with 3 goals and helping the country win the silver medal.
"He (Mourinho) was very attentive to young people. Me, Santon, Balotelli. He told us to play our football," Obinna said to Gianluca Di Marzio.
"We had great masters on the pitch, like Ibrahimovic. He always wanted to win. If he lost a match in training he would get angry with his teammates. His favorite target was Viera".
Obinna has recollected the only goal he managed to score in a Nerazzurri shirt, on his full debut against AS Roma in October 2008.
He added : "It was the best year of my life. We won the Scudetto and I scored a great goal against Roma".