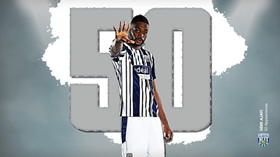 Versatile Super Eagles center back Semi Ajayi made a milestone appearance for West Brom in their 1-1 draw with Brighton & Hove at the AMEX Stadium on Monday evening, allnigeriasoccer.com reports.
The former Arsenal U23 captain has now appeared in 50 official matches for the Baggies since joining the club from Rotherham United on July 19, 2019.
Ajayi played 5 games for West Brom in the Premier League, 43 in the Championship, and one each in the League Cup and Emirates FA Cup, totaling 4,394 minutes.
The 26-year-old has five goals to his name in all competitions, all of them netted in last season's Championship.
Of his fifty appearances for West Brom, he was named in the starting lineup on 49 occasions while coming off the bench once, in a 3-0 win at Sheffield Wednesday in January 2020.
Nigeria's record appearance holder for West Brom in the Premier League is Peter Odemwingie with 87 games, followed by Victor Anichebe (55), Nwankwo Kanu (53) and Brown Ideye (24).
West Brom forced a 1-1 draw at Brighton thanks to Karlan Grant's late goal.
Ifeanyi Emmanuel
Photo Credit : wba.co.uk
Copyright ANS