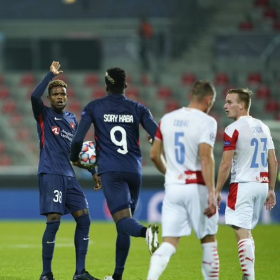 Danish football expert Klaus Egelund has highlighted Frank Onyeka as one of the key players in the Midtjylland squad that Liverpool should pay special attention to in Tuesday night's Champions League meeting at Anfield.
The Ekstra Bladet journalist was contacted by Liverpool's media team to provide the lowdown on the Midtjylland team and has pinpointed central midfield, where Onyeka operates, as their strongest department.
Egelund revealed the attributes that make the one-cap Nigeria international flourish in his midfield role.
Speaking to Liverpool's official website, he said : "I would without hesitation mention the Nigerian, Frank Onyeka, in central midfield.
"Very quick, physical and strong – he rarely catches the eye but the way the team dips in performance without him speaks volumes".
The Super Eagle is expected to take to the Anfield turf on the same day as the funeral of his father Jerry Onyeka, who passed away unexpectedly last month at the age of 55.
"It was always my father who supported my dream of playing football. My mother accepted it over time, but he was always there and he would have been so proud to experience this.

"He had a heart attack a couple of years ago, but he had recovered from it. Then during the year he had problems oxygenating the blood well enough, and in the end it became so bad that he did not survive it," Onyeka said to Ekstra Bladet.
The 22-year-old Onyeka has started all the five matches contested by the Wolves in Europe so far this season, including four in the qualifying and play off rounds of the Champions League.
Ifeanyi Emmanuel
Photo Credit : fcm.dk
Copyright ANS