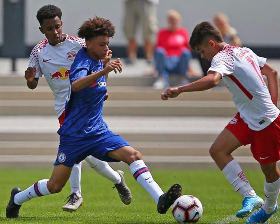 Richard Olise was among three players of Nigerian descent on parade as Chelsea began their quest to win the U17 Premier League Cup with a hard-fought 1-0 victory over their Reading counterparts at Cobham on Tuesday afternoon, allnigeriasoccer.com reports.
Richard is the younger brother of Reading playmaker Michael Olise who used to play for Chelsea's youth teams prior to his move to the Royals.
Richard Olise slotted in at right wing-back and he was joined in the starting line-up by defender Derrick Abu, a first-year scholar.
Chelsea were thwarted in their attempt to find the net and it remained goalless at the break.
With fourteen minutes remaining, the Blues finally broke the deadlock, Malik Mothersille the scorer after a counter-attacking move.
The third player of Nigerian descent handed minutes was Tudor Mendel-Idowu who came off the bench to replace Edwin Andersson on 70 minutes.
Chelsea will also face Southampton and Fulham in Group C of the U17 Premier League Cup, with the winner of the group advancing to the knockout stages.
For the 2020-2021 season, the U17 Premier League Cup has replaced the U18 and U16 versions and it offers youngsters the chance to play some competitive games.
Ifeanyi Emmanuel
Photo Credit : instagram.com/r.olise
Copyright ANS