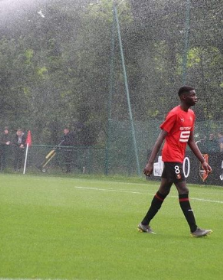 French Ligue 1 club Rennes have included 2004-born Nigeria-eligible midfielder Lesley Ugochukwu in their matchday squad for Wednesday's Champions League clash against Sevilla at the Estadio Ramón Sánchez Pizjuán, allnigeriasoccer.com reports.
Ugochukwu has long been touted as one of the best prospects at Rennes and was offered a professional contract in the summer of 2020.
Blessed with excellent physical attributes, powerful and tall for his age, Ugochukwu has been likened to former Arsenal captain Patrick Vieira.
Young France international Eduardo Camavinga is unavailable for selection due to injury and manager Julien Stéphan has decided to call up Ugochukwu as his replacement for the trip to the Andalusia province.
Should he step out on to the pitch today, he will become the first player of Nigerian descent born after the 2003 FIFA U17 World Cup to feature in the Champions League, aged 16 years, 7 months and 2 days.
Ugochuwku is also in line to overtake Greece international Charalampos Mavrias as the fifth youngest footballer to be used in the Champions League.
He has not made his professional debut for Rennes and mainly plays for their U19 team.
Ifeanyi Emmanuel
Photo Credit : instagram.com/l.ugochukwu8
Copyright ANS