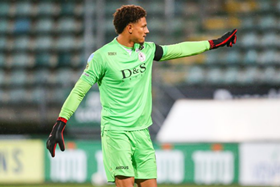 Super Eagles goalkeeper Maduka Okoye finally made his competitive debut for Sparta Rotterdam's first team in a KNVB Beker match against ADO Den Haag on Wednesday night, allnigeriasoccer.com reports.
A summer arrival from Fortuna Düsseldorf, Okoye was handed his first start in his team's seventh official game of the 2020-2021 season.
The young glovesman was a non-playing substitute in five matches in the Eredivisie and sat out the 1-1 draw at Feyenoord ten days ago but got a taste of action in two matches in the Tweede Divisie for Sparta Rotterdam U21 team.
Danzell Gravenberch opened the scoring for the visitors in the 39th minute but goalkeeper Luuk Koopmans' goal in the fourth minute of second half stoppage time took the game to extra time before penalties.
Before the equaliser, Okoye made two brilliant saves to deny Boy Kemper and Ravel Morrison and also prevented Nikolaos Karelis from scoring in the closing minutes of the game.
ADO Den Haag were the luckier of the two teams in the shootout, converting all their spot kicks while Sparta Rotterdam missed their third kick which knocked them out of the Cup.
Ifeanyi Emmanuel
Photo Credit : sparta-rotterdam.nl
Copyright ANS